Remember when I created a list of books for this Pride and Prejudice challenge?

That's out the window.

Instead of the titles I chose at the time, I opted for two more Elizabeth Aston sequels, as well as a young adult choice to spice things up. That's right, I read THREE books this month-- impressed?! 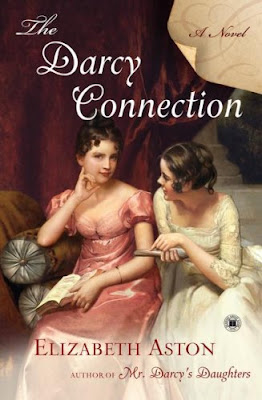 Remember the dimwitted, long-winded Mr. Collins (how could you forget him?), cousin to the Bennet's and title holder of Worst Marriage Proposal in all of Literature? Well he's Bishop of Ripon, and has two daughter's: Charlotte, the eldest and most beautiful girl in all of England, and "Plain Jane" Eliza. They also have a son, Charles, who's supposedly just like his father, but while the name is tossed about, the Collins boy isn't actually in the story.

The Darcy Connection is the fifth installment of Elizabeth Aston's P&P JAFF series and while not the strongest, still enjoyable. While sisters by blood, Eliza and Charlotte have few sisterly bonds: Eliza possessing a free spirit and wearing her heart on her sleeve, and Charlotte a statuesque reserved beauty with little warmth and no personality. Despite their differences, Eliza is thrilled Charlotte is given a London season by her wealthy great aunt and godmother, completely content with staying in the country and perpetuating her secret engagement to the Squire's son.

Only the Squire and his wife have no intention in letting Anthony-- their pride and joy-- marry beneath him.

So Eliza is shipped to London with Charlotte and Lady Grandpoint as a poor country relation with no support from her aunt, though she's permitted to attend social occasions thrown by her godmother Mrs. Darcy's daughter, Camilla Wytton. It's at such a function where she meets Mr. Bruton, a wealthy banker, and the usual "P&P love triangle" begins. As always, George Warren shows up in a villainous capacity, something happens to almost ruin our heroine's reputation, and all is set right again by our hero.

The stereotyped females-- plain but with personality, beautiful but cold-- the gruff hero, and one-dimensional friendly recurring characters felt redundant, and there were a few plot points unaddressed at the conclusion of the book. Furthermore, while the sisters' dynamic is certainly different, Charlotte is really a total bitch for no reason at all, especially since Eliza has not an ounce of jealousy toward her (which I also found hard to believe).

Like I said, The Darcy Connection isn't my favorite of the six books, but as a whole Aston's warm tone and excellent writing make it worth reading. 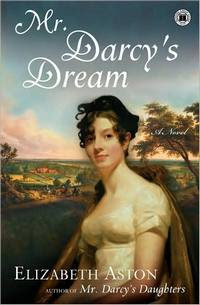 Our heroine in Elizabeth Aston's final book in the series, Mr. Darcy's Dream, is Phoebe Hawkins, the daughter of Sir Giles and Lady Hawkins, formerly Georgianna Darcy. Poor Phoebe fell fast and hard for Arthur Stanhope right before her London season, but unfortunately her father vehemently rejects Stanhope's proposal on the grounds of his keeping a mistress. Phoebe discovers this to be true and escapes to Pemberly where she's joined by Louisa Bingley to rusticate for the summer and plan the annual Darcy Ball.

Soon they're joined by Mr. Drummond, the new "man" hired by Mr. Darcy to construct a massive glass house for all of the tropical plants he brings home from traveling, and Drummond's old army buddy.... Arthur Stanhope!

Aston attempts to take her JAFF in a different direction by making this a romance of forgiveness and acceptance, rather than growing the relationship from the beginning. Moral hypocrisy was the theme of the day, and I applaud Aston using that time period to tackle such a racy topic. However, Phoebe running away from Stanhope got old fast; it's hard to think her mature enough for marriage to a man ten years her senior when she can't even confront him about keeping a woman. Also, the actual romance wrapped up in the last few pages, a bit disappointing.

As always, the writing--descriptions of fashion, architecture, gardening, the language-- is excellent, and I love that Aston uses a strong vocabulary compared to many JAFF books. As cheese-a-licious as this sounds, when I read this series I'm transported. Plus there's a good twist at the end and who doesn't love to be surprised in a predictable story. 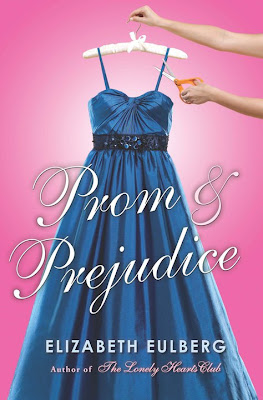 Out of curiosity, I asked our librarian if they knew of any Young Adult JAFF books-- I was curious if authors tackled adaptations of the classics at that age. I was right to inquire. While Elizabeth Eulberg's Prom & Prejudice is technically "YA," it's in the teen section of our library, probably because The Prom is a big part of the story.

At prestigious Longbourn Girls Academy, scholarship students spend their days being bullied, hazed, and tortured by the uber rich student body. Lizzie Bennet discovered this painful truth when she entered Longbourn in her junior year on an academic and music scholarship. Returning for her second semester, she's jaded and emotionally closed off from the student body with the exception of roommate Jane Netherfield and fellow scholarship victim, Charlotte Lucas. However, it's important to Jane that Lizzie get to know Charles Bingley from Pemberley Boys Prep, even though the snobby Will Darcy is always hanging around.

This was a fast, simple read, and I felt a little insulted on behalf of the teenage population because the writing was so dumbed down. Prom & Prejudice seriously lacks description, characterization, and depth. There were times during conversations where I couldn't tell the difference between who was talking. Though relevant, the stereotype of Rich vs. Poor is done one dimensionally with EVERY rich girl except Jane treating Lizzie like crap. No one else at that school would give her a chance... really?! While I loved that Lizzie is a piano prodigy, it didn't make sense that no music students would befriend her and admire her talent. That's just not fair to teens.

The main issue I had with Prom & Prejudice is Lizzie's character. Jane Austen's most famous heroine may not be rich, but she's confident, witty, and full of life, hence why she's comfortable enough to be herself among snobs like Caroline Bingley and Lady Catherine. This Lizzie will argue with Darcy, but cowers from everyone else, running through the halls away from people, and only replying with nasty comments. Where's that sardonic sense of humor, the amusement at the quirks of the upper class?

It wasn't all bad. There was a great twist, I liked the Lizzie and Darcy banter, and even though some of Lizzie's humor with Jane fell flat, there were several amusing moments. Diehard P&P fans will enjoy the book for the joy of reading a different version of their favorite characters, but I wouldn't recommend the book to teens as a way to introduce Jane Austen-- just give them the classic: they can handle it.

Jamie
"Have a heart that never hardens, a temper that never tires, a touch that never hurts." Writer. Gamer. Artist. Nerd.